Any dream will do

I've spent most of my adult life trying to get published by a traditional publisher. That's four finished novels and over forty years of rejection slips. Anyone in their right mind would have given up years ago. They can't all be wrong, can they?
Well, maybe they can. Fortunately, the internet threw me a lifeline. I "published" A Half Life of One over on my sister blog more than a year ago. Enough people read it and told me they liked it to allow me to think that maybe the book wasn't quite as bad as traditional agents and publishers seemed to think.
And so I abandoned my old dream and decided to self-publish. It wasn't an easy decision. I'm not used to failure. It wasn't until I finally realised that writing is all about readers and not about my own self-glorification that I could bring myself to accept the truth of my situation.
Once I decided to self-publish the rest was easy. I contacted Gavin Pugh of Gav's Studio and he basically did the rest with a minimum of input from me. Designed the cover, set the layout, got the ISBN number, organised the printer, etc etc. All with the minimum of fuss and the maximum of helpful suggestions. I think he knew I was hurting going down this route but he was very gentle with me. Thanks, Gav, you've been brilliant.
The book will come out in a couple of weeks time. I'll be sending signed copies to everyone who has asked for one - including a number of anonymous readers round the globe. Then it's on to the marketing phase - sending out review copies, seeking publicity etc. All the stuff that a traditional publisher would do, and maybe a bit more. I'm really excited by the challenge of elbowing my way into a crowded market place. I'll let you know how it goes.
Here's the front and back cover to give you a little taster. Hope you like it. 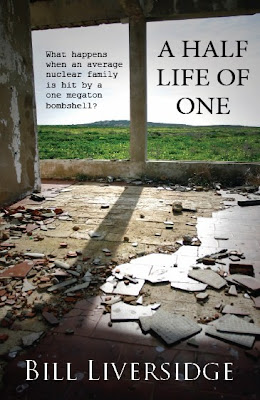 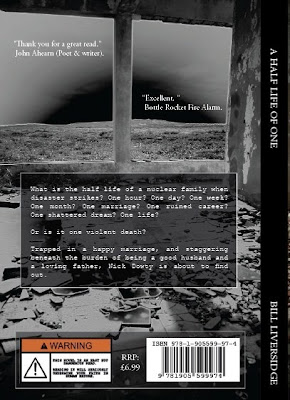 By Maxine Clark at Eurocrime


As things become even more desperate, and the tension is becoming unbearable, Nick dreams up a plan...There are a couple of creepy twists at the end of the tale, with a strong hint that the cycle will begin all over again - in a future book, perhaps. Let's hope so, because A HALF LIFE OF ONE is a very welcome addition to the thriller genre.
Read the rest here

By Suzan Abrams at A Writer's Palette

By the writer John Baker

I enjoyed this novel enormously and would place it among the better books I have read this year. It is well written, pacey, tense and thoughtful. Definitely something to put on your Christmas List.
Read the rest here

By the writer Debi Alper

A Half Life Of One by Bill Liversidge is a taut and chilling story about a man caught in a deadly trap of his own making...
Read the rest here

Montana writer Mary Scriver describes A Half Life Of One as one of the most chilling horror stories I’ve read. And it could happen anywhere.
Read her review here

Good writing, tidy plot, disagreeable characters, nasty little twisty end - what more can I say except to recommend it to others to read?
Read the rest here
Please e-mail me if you'd like to receive a review copy

Links to my free online novels